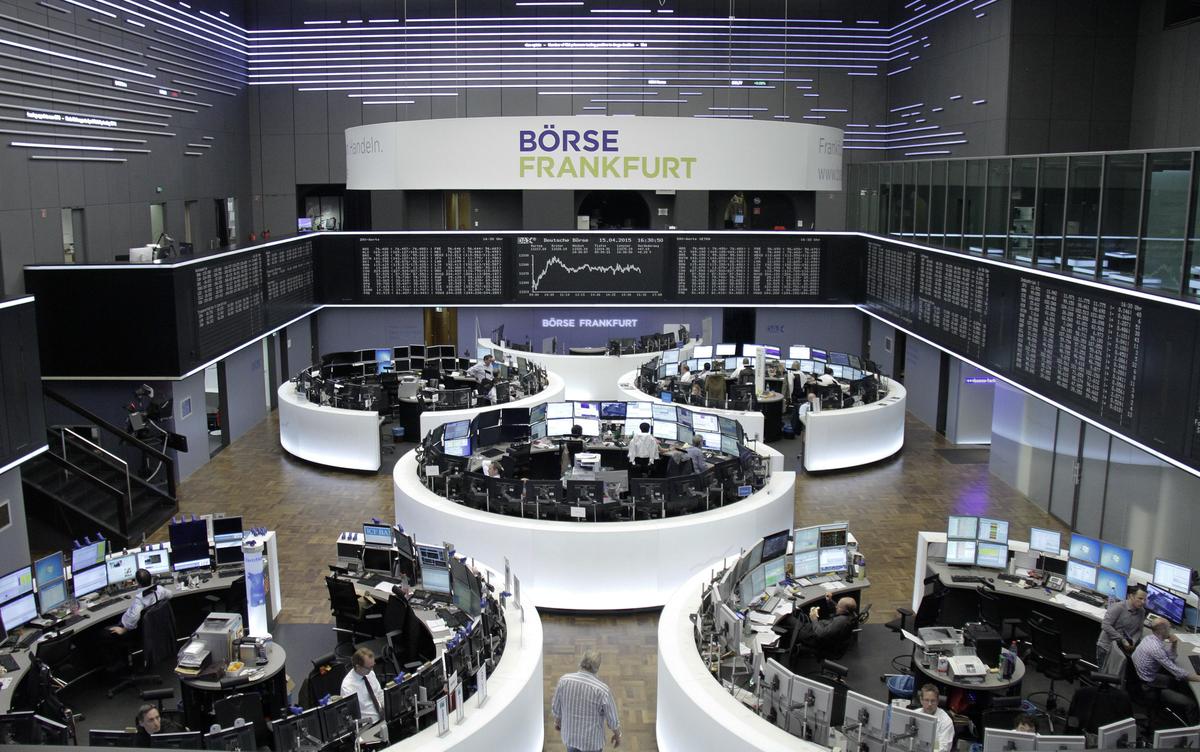 FILE PHOTO: Traders are pictured at their desks in front of the DAX board at the Frankfurt stock exchange April 15, 2015. REUTERS/remote/Pawel Kopczynski

The other issue weighing on sentiment is the intensifying unrest in Hong Kong which many fear will lead to a Chinese crackdown. That pushed Hong Kong shares 2% lower and weighed on markets across Asia.

“The market was anticipating something more positive from Trump, but he didn’t deliver,” said Justin Onuekwusi, a portfolio manager at Legal & General Investment Management.

“In recent weeks, we saw the balance of probabilities shift to the positive side, risks being taken off the table, but people have realized that risk is still there,” Onuekwusi said. He’s been reducing his equity allocations, he said.

Trump’s speech threatened to raise tariffs on China, but he also said a trade deal was “close”, without offering details on when or where it would be signed. He also criticized EU trade policies before a Nov. 14 deadline to decide whether to raise tariffs on European and Japanese carmakers.

That deadline will probably be extended, but investors remain jittery. A pan-European equity index fell 0.6, coming off Tuesday’s four-year highs, when optimism before Trump’s speech and better-than-expected economic indicators from Germany boosted stocks.

Brent crude oil futures fell more than 1% as the diminishing prospects for a resolution to the 16-month long trade war suggested less future demand for energy.

Expectations for phase one of a trade deal this month have supported stocks and riskier assets recently. Investors were led to cut the share of cash in their portfolios to six-and-a-half-year lows, according to Bank of America Merrill Lynch’s monthly survey of global managers.

However, lack of progress on an agreement has started to increase doubts about whether a trade truce will happen at all.

“I’m absolutely concerned. The clock is ticking,” said Michael McCarthy, chief market strategist at CMC Markets in Sydney. “Markets are now expecting substantial progress in the next week or so, and if not, then confidence could crumble.”

Equity futures suggest a weak session for U.S. stocks, where the S&P 500 backed off record highs after Trump spoke. Nasdaq and Dow Jones futures were also down 0.5%

The S&P 500 has risen 2% this month and 23% so far in 2019 thanks to interest rate cuts, trade hopes and robust corporate earnings — profits at three-quarters of S&P 500 companies have topped expectations this quarter, according to Refinitiv.

But a more prolonged standoff will revive fears for the world economy. Oxford Economics estimates the trade war has trimmed eight-tenths of a percentage point off U.S. growth. Having started 2019 with 3.1% growth, the economy eased to 1.9% in the third quarter, they noted.

Asian markets were also rattled by Trump’s speech and Hong Kong’s turmoil. Onshore spot yuan fell to a low of 7.0270 per dollar at one point, the weakest since Nov. 5.

Hong Kong protesters planned to paralyze parts of the city for a third day, with transport, schools and many businesses closing after violence escalated across the city.

Hong Kong interbank rates rose, with one-month HIBOR at its highest since Aug. 6.

The standout currency performer was the New Zealand dollarm which jumped 1% after the central bank unexpectedly left interest rates unchanged at 1%.

The U.S. dollar gained 0.05% against a currency basket, just off three-week highs. The damage to risk appetite pushed down yields on U.S. and German safe-haven debt. Yields on 10-year Treasury notes US10YT=RR fell to a six-day low around 1.87%; 10-year Bund yields were down 4 basis points to minus 0.28%.